Sand in the Apricot Jam is a visual arts project by Rebecca Holden that acknowledges the role of the New Zealand Mounted Rifles in WWI, particularly in the Middle East theatre of war. Their contribution at Gallipoli will also have a small representation in the artwork.

The title comes from my Grandpa’s distaste for apricot jam. You see he explained to my mum one day that he hated apricot jam because it reminded him of the rations from the war. The ‘sand’ in the title refers the desert conditions endured my the soldiers in Middle East.

Rebecca’s grandfather served with the Auckland Mounted Rifles and was wounded at Gallipoli. He returned to serve with his regiment in the Middle East until the end of the war.

The work, when completed, will consist of 4 large scale paintings (1.3 x 3m) representing different aspects of the role of the New Zealand Mounted Rifles and the conditions endured by the soldiers and their horses in this harsh environment. Two of the panels will be created prior to the commencement of the exhibition in the Vector Gallery at Expressions Art and Entertainment Centre, while the remaining 2 panels will be painted on site over the period 12 July 2014 – 7 September 2014.

After the exhibition at Expressions the work will be toured to different galleries and museums around New Zealand. 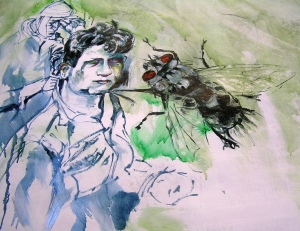 Detail of panel 1 under development, featuring injured soldiers from the Gallipoli campaign

“They lived with the dead and dined with disease” – anonymous from a poem about Gallipoli.

This is the journey of historical discoveries and the development of the artwork.